Unlike Cordoba, Granada feels like a big city which probably has a heart but we did not go looking for it.  We only had 1.25 days and the Alhambra was our destination.

We stayed in a tiny little hotel called Hotel Santa Isabel La Real just minutes from the Mirador de San Nicolas.  Most rooms had a window looking over an internal courtyard which was cool in the heat of the day.  There was also complementary brandy steeped in fruit or olives in the library 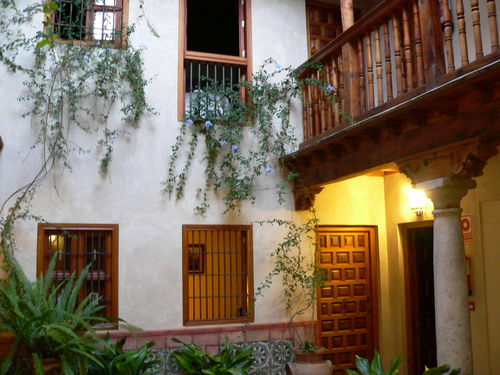 The accommodation was in a perfect location with a bus that took us directly to the Alhambra, town and the airport bus stop right outside the door.  Within a few minutes walk we were at the Mirador de San Nicolas, which looks out onto the Alhambra. Hundreds of people visit here to watch the sunset over the Alhambra.


Just around the corner there was a plaza with a few cafes but one took our fancy with a tantalising menu - we did not realise how big some of the dishes were and ordered way too much food!  Luckily for us they put tomato on one of the dishes by mistake so we could ask them to not bother making another.  The white anchovies were a very tasty treat


Alhambra covers a huge area - but can be broken up into 4 main areas:

The Generalife - has the most amazing gardens and fountains, 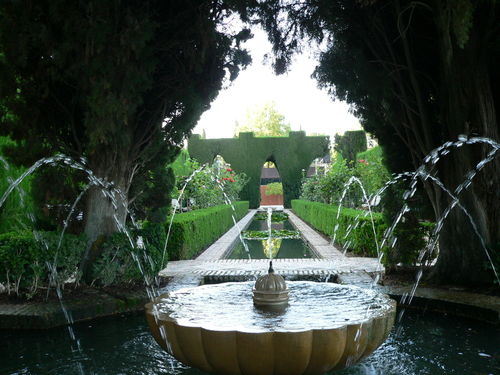 outdoor theatre and the most beautiful Palace which has lovely water features surrounding its entrance and exit creating a cooling effect.

We took a stroll around these gardens in the cool of the morning when you could still smell the scents coming from the flowers, herbs and fruit trees.  This region is very hot and dry, so a river was diverted to provide water for the Alhambra - it is distributed around the Generalife using two channels - one each side of the stairs.

The next stop was the Nasrid palace.  The detail on the walls, arches and floors are very much like the pictures you see of the Tah Mahal in India - it looks like coral in a lot of ways - absolutely amazing!   They must have been painted originally as you see shimmers of blue and red in the lattice work - stunning! 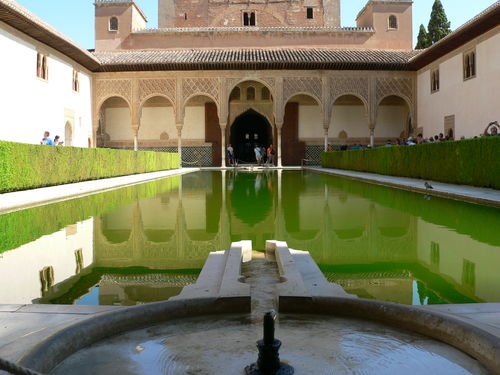 The Parador(Convent of San Francisco) is the next area we visited where you can take a break from the crowds and walking in the heat.  The cafe has views out over the chefs garden full of herbs, the valley and the Generalife...an awesome place to take a break but slightly on the expensive side.  We decided to try a selection of little cakes which were very sweet, nutty and just over a bite size each. 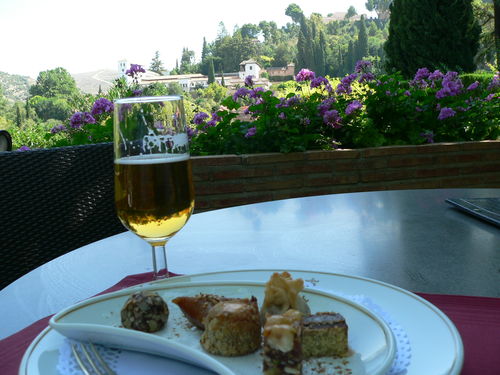 The last place we visited of significance is the Alcazaba - one of the oldest parts of the Alhambra. From here you have amazing views over the city of Granada, towards the Mirador de San Nicolas and down into the valley where the middle eastern influenced shops can be explored.  Four flags fly from here representing - the EU, Spain, the district and Granada.

There are many other little gems hiding at the Alhambra including the baths and the wonderful  Palacio del Partal (Part Palace with wonderful garden, pond and terraced area 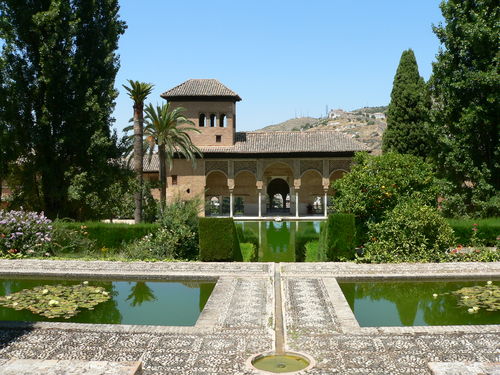 We had an awesome day exploring the Alhambra - but here are some tips especially if you are travelling in the middle of summer: