First a bit about the festival…the festival in Thailand is held on the night of the 12th full moon of the year which is at the end of October to the middle of November – dates depend on the date of the full moon each year.

The word “Loy” means to float and “Krathong” is a small vessel made from cut sections of bamboo, with neatly folded banana leaves around the edge in the shape of a lotus flower which can float on water. It is decorated with flowers, a candle is placed in the krathong (wreath), along with incense sticks and small coins.

A wish is then made and the krathong is sent floating down the river. This act is seen as a symbolic gesture of gratitude to the Mother River – the source of water without which they could not survive. Thai belief is that floating the beautiful Krathong away also refers to sending away misfortune and bad things from the past and asking for good luck & fortune in the future.

Some people put money on them as well and you see people downstream checking those that have come ashore in the hope that they might find something of value! 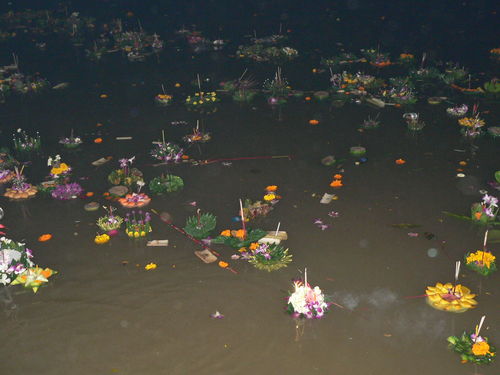 In Chiang Mai they also release thousands of “Khom Loys” (paper hot air floating lanterns) into the night sky all over the city. These lanterns have fuel dosed coils or small containers with oil connected to the bottom, and when lit the paper lanterns fills with hot air and then floats away along with all your bad luck and misfortune.

You are not supposed to release them until after 9:30 pm when the airport closes, however as soon as it gets dark the sky would be filled with lanterns as far as you could see. I am pleased I was not in a plane as the lanterns were floating past!

We had bought 4 lanterns and were given another by 3SIS and off we went to the Ping river via the Parade which was supposed to start at 6pm but did not start until 7pm We were due to meet up with Renske and Frank for dinner in a restaurant by the river so we only got to see the start of the parade. We did get to see the winning float... 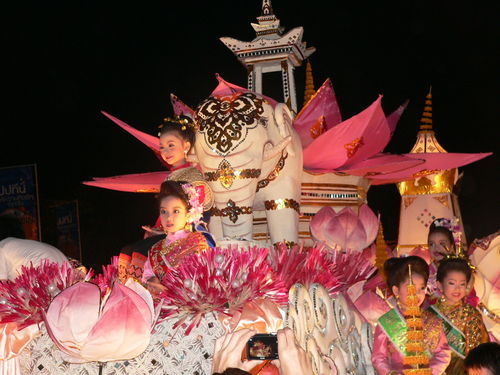 From the safety of the restaurant we watched the locals celebrate the festival with fireworks, crackers, lanterns and krathongs.

The noise of crackers and rockets going off was endless. We worked out where we would release our lanterns and the Krathong that Reske and Frank made with the help of the locals and headed for our designated release point on the river. We had to pass heaps of people releasing rockets from their hands and throwing crackers at any thing and anyone. This reminded me of the days when I was very young before regulations prohibited the use of crackers and made people more aware of the dangers of fireworks. Given the volumes of people, the lack of safety awareness and the noise we found it a little scary. 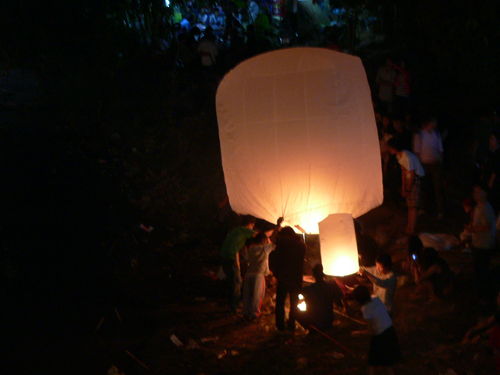 We finally made it to our designated balloon release place and joined the locals in lighting our lanterns. Meanwhile the locals were also lighting fireworks behind your back and the next minute you would be showered by the fireworks....scary!!

It was awesome to release the lanterns into the air! Revi wrote her poem on hers before releasing it. 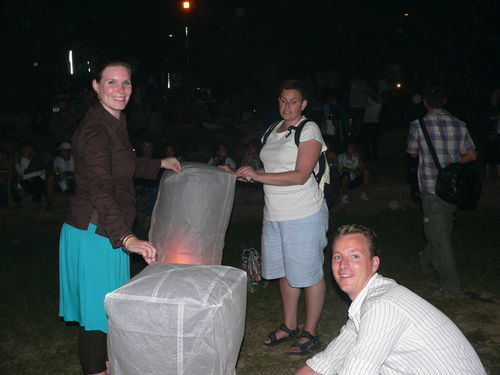 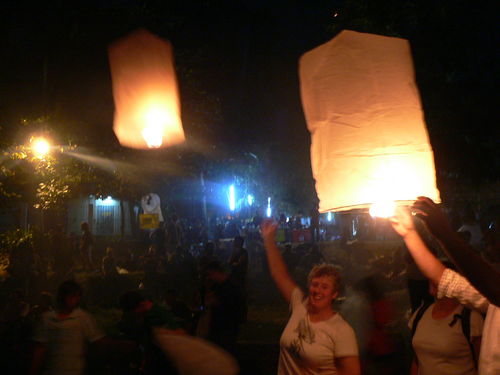 As soon as we finished lighting our lanterns, we found a tuk tuk to take us away from the river and back to our hotel. Our departing gift from a local was to throw crackers under the tuk tuk as we speed away. The driver swerved madly, and speed off into the distance as we left the noise and the dangers behind us and returned to the serenity of our lodge. 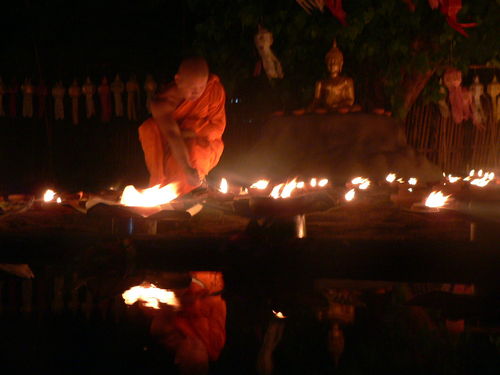 which just looked absolutely stunning. It was very hard to catch properly on camera even with the tripod.


I found myself walking through a sea of candles!! It was absolutely beautiful. 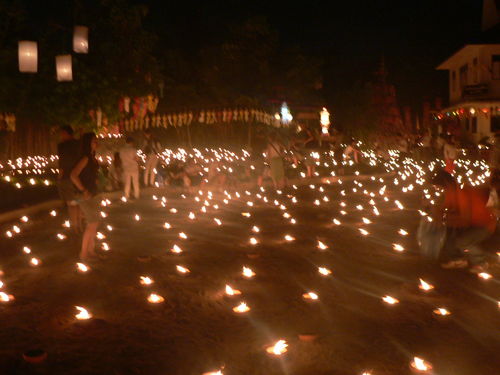 More photos can be found in the photo gallery
< Prev Next >