Ok... so you are probably aware that over the last few months Yofi has progressed from catching lizards 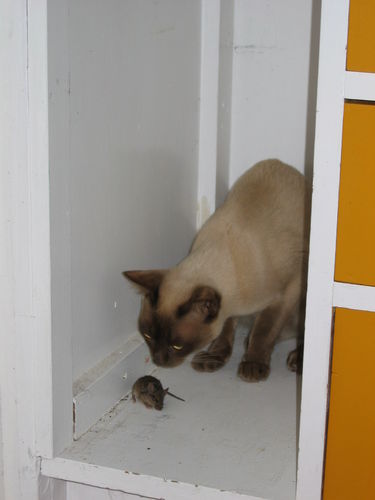 to mice
to birds
to rats

And last night our tiny little cat brought in a RABBIT. It was about half her size.. so when the cat flap made a solid THUD.. and we heard THUMP, THUMP, THUMP all the way down the wooden hallway we knew she had something BIG.

At least she is earning her keep! And her treats are getting a little more edible.

Check out our latest grape protection system designed by Yofi. 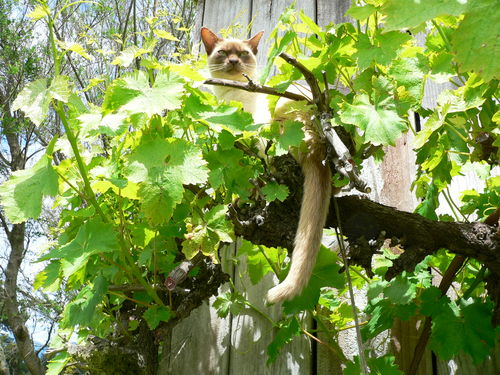 Let's hope she wants to sit around when the grapes are ripening!  Several design modifications have been suggested including tying Yofi to the vine so she does not move on.  For now I think we will remain with the trusted grape netting.

Rongomai  Ridge has two grape vines - a white and red grape vine and last year they produced more grapes than we could eat even with the help of our neighbours!  You can see photos of last years grape production in our photo gallery.

I may be called Bailey but my my new mum thinks I should be called Hooverdor due to my ability to quickly devour anything that gets mistakenly dropped on the floor!

I love to cleanout mum’s yoghurt container after she has finished with it in the mornings and eat the crusts …especially when there is honey on top! 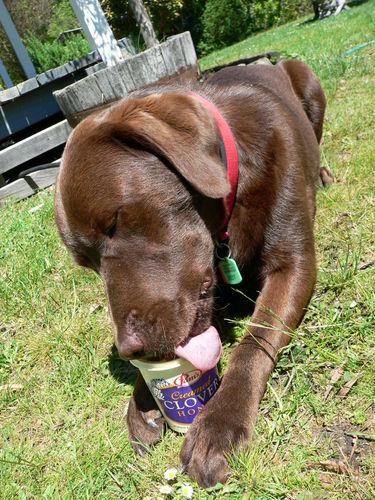 Today I stole the honey pot off the table outside and licked and chewed it clean!  Mum said people might mistaken me for a bear…it was okay as it was empty bar the dregs and she was going to give it to me to lick clean anyway.

Each day we try and go for a walk with Roman from next door and sometimes Gemma is staying over at Roman’s so she comes too.  If we don’t go for a walk we play fetch with sticks and pinecones in the backyard .  I love to play dodge with Roman as he tries to steal the stick from me…I am a big softy and give it up easily when he catches me!

I am a little naughty cause I like to play with Roman across the road so I used to sneak over there all the time and mum would come and drag me home!  Anyway a new fence was put up to keep me in and it worked for a while…but I am as clever as clever and found a new way to get out thru the old part of the fence that was not replaced!  Mum was out there moving wires on the old fence today and I have checked it out….looks like she has me trapped inside once again…I will start looking for a new way out tomorrow.

I like to chase my sister Yofi who is a Chocolate Burmese pussycat.  She tries to stalk me and jump on my back and then we chase each other around the living room when mum is watching TV.  I am not allowed on the couch so Yofi teases me by jumping on the couch and rolling around so I have to jump up too!  I always seem to get told off and have to jump off quickly…and Yofi just lies there and purrs away. Life isn’t fear sometimes. 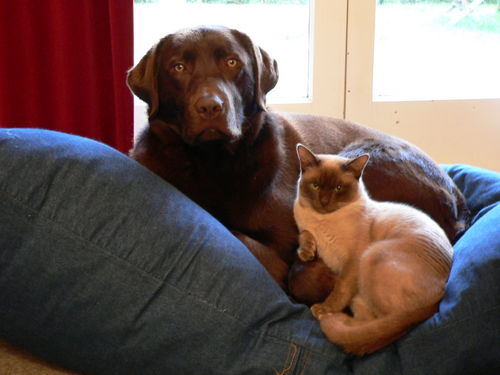 I have a big beanbag of my own which I love to doze in but Yofi seems to like it too!  She climbs on in when I am resting and I just have to let her curl up beside me otherwise there is trouble.  Sometimes she jumps onto my beanbag when I am not on it, curls and goes to sleep in the very centre leaving no room for me.  I try to get it back by lying on top of her but I just get told off so I am learning to slowly push my way in and eventually Yofi will make space for me.

I love cuddles and sometimes I have just got to climb onto mum’s knee … but I am very careful not to touch the couch!  Mum just laughs and pushes me off and then I get my cuddles.

On nice sunny days I like to lie in the sun and bake myself until I can stand it no longer and have to move into the shade.  Mum says that’s why my tail has turned a gingery colour and I am getting patches on my back as well.  Sometimes I climb into the water barrel when I am extra hot and need a cool drink and a paddle.

Every few weeks when mum is going to town I go on a play date to Bodi’s house.  Bodi is one of my friends that I love to play with.  We play so much that I can hardly keep my eyes open on the way home and then I fall asleep on the beanbag.  Sometimes I don’t even wake up when it’s dinnertime because I am soooo tired.

Now that I am one, I am a big boy but still very playful and a little naughty …still loads of puppy left in me yet!

Anyway that is about all the news from me. 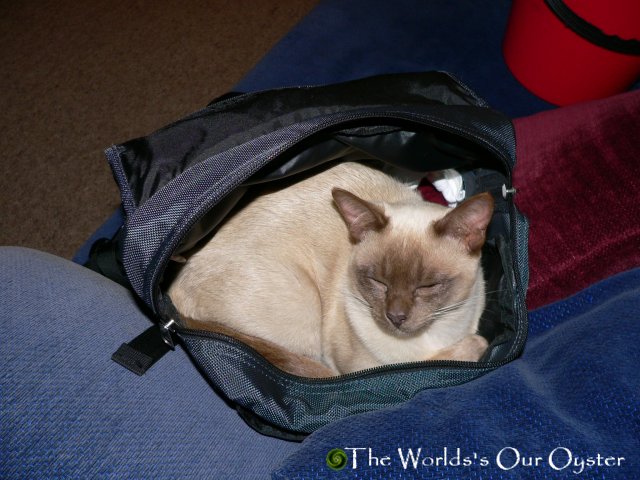 Yofi discovered that my backpack which had my nice possum scarf in it was the perfect place to take a cat nap!

Bailey went under the knife in June after a weeks delay.  Bailey was due to lose his manly parts in early June, however he threw up everywhere on the morning of the schedule operation so the vet delayed the op for a week.  Everyone wonders if he knew what was going to happen and so made sure he delayed the process!
We did not make too much mention of the new date just in case he had extra special abilities to understand what was happening.
He was very bouncy when I collected him from the vet and then he wanted lots of cuddles and kept falling sleep at the drop of a hat.  We knew all was well when we mentioned food and he leaped from his bean bag in excitement!