We landed late so the first thing we did when we got to Paris was eat at the airport! A nice steak and red wine for me, and chicken for Mich. Oh heaven!

Mich had managed to secure this most amazing deal with the Airport Radisson in Paris, so we had an overnight at a 5-star hotel for less than the price of a Youth Hostel in Norway. Oh it was luxury. It was the first night we had actually slept in the same bed as for the two weeks in Norway everywhere was single beds. No wonder there are not that many Norwegians in the world! The shower had so many knobs and different bits and pieces which squirted that it needed to come with a user manual. 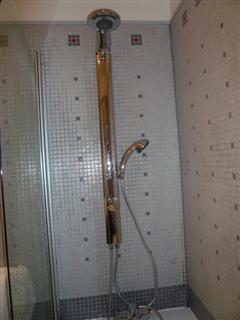 The next morning we made extensive use of the free internet to skype family and update the website before catching the train into the city and our less celebruious accommodation. Mel had promised Mich lunch in Paris for her birthday so we ended up at one of her favorite little places just off St Germain-du-pris. Mich had escargot, followed by hot preserved duck and Lemoncello sorbet to finish. 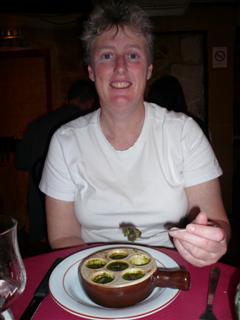 Mel started with a duck pate, followed by the melt in the mouth preserved duck, with a crème burlee to round off a perfect meal. Of course, don't forget the pitcher of wine to go with it all (well it wouldn't be France then would it!). All for 12 Euro each!!

We needed to walk off our lunch so went to the Lourve to roam the miles and miles of halls. The Lourve has one of the biggest collection of Egyptian antiquities outside of Egypt, so we indulged Mel's first love. Studying the intricate stories of everyday life in the tomb hieroglyphics, marveling at sculptures, preserved food, mummified cats, and equipment to aid them in the afterlife and standing in awe at the caskets and sarcophagus which held them entombed for centuries. 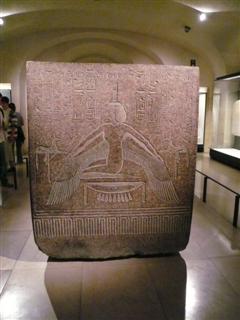 From there we moved through the various room of the Louvre from when it was a palace. Each ceiling was a masterpiece in itself, and sometimes more-so than the art it was housing. Mich commented that we needed to get around by lying on a skateboard device, as our necks were getting so sore from constantly looking up. 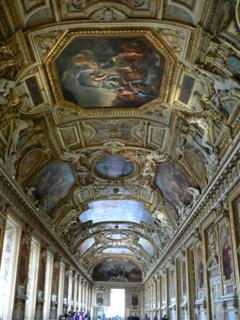 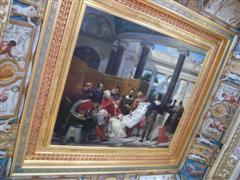 Of course, what would be the Louvre without a visit to “La Joconde”, or the Mona Lisa as we know her and that evocative smile of hers. Mel had just finished an action book on stealing her and selling reproductions on the international market, but gave up any idea of acting it out after seeing the amount of security surrounding her. 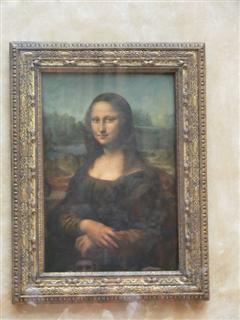 The Venus de Milo had less security, but that is probably because she is armless (harmless, har har har). 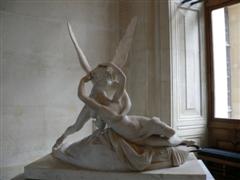 The funniest piece had to be the supports of a fountain with Giants playing “Where's Willie?” or “Is it really that cold in here?”. 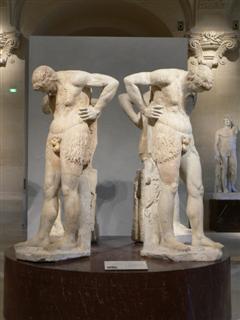 After such an exhausting afternoon of walking and looking we needed to top up our energy levels with another meal. So this time we chose African. Strange choice for Paris you may say.. but with such a large African population we thought it was be a good opportunity to experience it. Unfortunately, Mel's school girl French (which she proudly failed for three years running) didn't extend to African menus, so we took pot luck and ended up with spicy meat and half a chicken. Oh well. It was tasty.