Over 5 days driving Mich has been getting highly frustrated with the 60km speed limit going through countryside with lots of small lifestyle type properties. Just as you pass though a village, then get up to 90km, another cluster of houses appears! 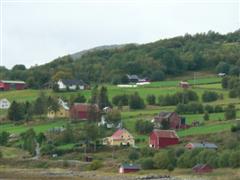 Mich is adhering to the speed limit as we were told by a lovely couple of Finnish boys (on a surfing and hiking holiday, after having a rafting holiday in Lapland!) that an Italian joker had copped a fine for $15,000 crowns ($54,000.00 NZD) for doing 100km in a 60km area!! Yes, and to think we were worried about the price of bread!! As it stands, petrol here is $3.60 NZD a litre!

Have you ever gotten to the point where your eyeballs ache from the cold? 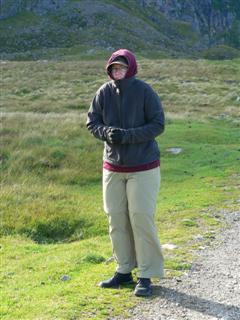 That is what it felt like as we took a walk out to a sculpture at Eggum. Again it was a balmy 8 degrees, but the wind ripped through all 5 layers of clothes making you marvel at the people who choose to live here all year round. The sculpture of a head was pretty amazing, as you walked around it the perspective changed so that the head ended upside-down. 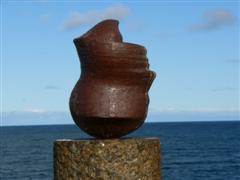 So since everything was closed, and we'd seen every village in the Lofoten Island we drove up north to the Vesteralen Islands and along windy roads and the artists colony of Nyksund. 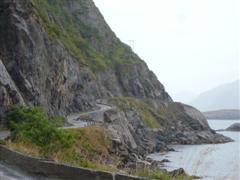 We had been told by many different tourist offices that this beautiful fishing village had been rebuilt over the last 10 years by many hippy types and had become the centre of art and culture. Yippee.. sounds like us, so we rang through and booked a bed at the Holmvick Brygge (old fish storehouse which had been turned into accommodation). 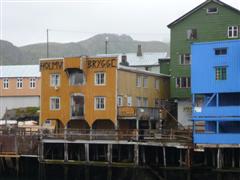 When we arrived, the entire village was like a ghost town. Honestly, a tumble weed blew past the car in the howling gale. We located the Brygge and found we were the only guests (in the town) as everything closed the day before for winter. Thank god we still had a few bits and pieces of food left to cook for dinner, as they only thing open was over 50km away.

We woke up the next morning to 5 degrees and the sound of rain battering against the window of the brygge, so we decided to drive 200km over the boarder to Sweden. It was raining there too. 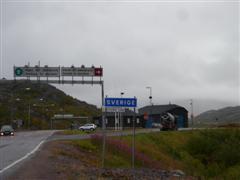 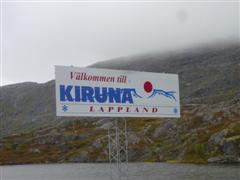 Along the roadside every so often you see a sign for MOOSE. 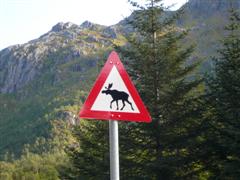 We think it is a tourist teaser to keep you glued to the window for hours at a time scanning the countryside. Norway really needs to invest in some sheep signs, as quite frequently you round a sharp bend on a one way road and are confronted by a mob of stroppy sheep. 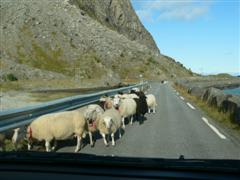 We spent our last night in Narvik (a coal mining town next to a pretty fjord, again), where we had an authentic Norwegian meal of over-cooked fish in a white sauce. Next morning we awoke to fresh snow on the hills around us! Thank god we were flying to the relative warmth of Paris!

First thing we did when we got to Paris was eat at the airport! A nice steak and red wine for Mel, and chicken for Mich.