The most important method of income for the Lofoten Islands is from the fishing and processing of Norwegian Arctic cod.

All over the island there are wooden a-frame drying racks for drying the cod into stock-fish, which is then exported to Italy. And oh, the smell... 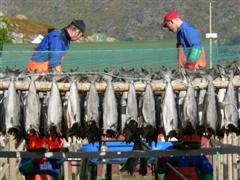 How I wish technology has advanced to scratch and sniff email so I can share it all with you. Actually you can DIY this at home. Take two Arctic cod, cut, clean, chop off their heads, then tie their tails together. Next hook them over the clothes line. Repeat until the clothes line is full and every clothes line in the neighbourhood for a 100km radius. Because stock-fish is so sort after, the saying here in the islands is that you can “Smell the money”. Mmmmmm... actually something smells fishy.. (sorry, just had to say it). Once they are dried; they are stacked like firewood into large storehouses (Sjohus) before they are exported and that is where they seem to be the most stinky. 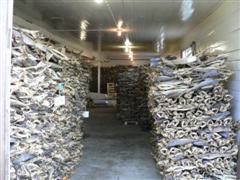 HUGE, rugged, barefaced, granite mountains form the backbone of the Islands. They loom over everything, creating an ever changing backdrop of muted shadows. 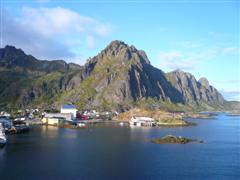 And believe it or not, the Arctic beaches are of the whitest sand, with the clearest water in which you can see down for meters. During summer the beaches are covered with bikini covered, blue eyed, blonde hair babes (unfortunately we just missed the experience) lounging on sand, but with the cold, cold Arctic water, so only the hardy swim. 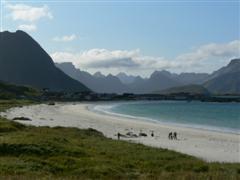 On most stony outcrops, which form natural harbours, small fishing villages are built. These usually consist of Rorbu 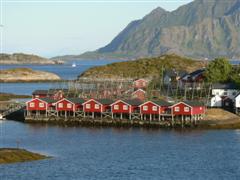 built on wooden platforms over the water with tiny little fishing boats (looking just like Little Toot from the old golden books) tied up to them. Rorbu was built last century to house fishermen (ror = row bur= to live in), they are very pretty little red wooden houses with white windows. The red paint was originally made with the cod liver oil which was produced in large quantities from all the cod which was caught. Sjohus are the storehouses for the stinky dried cod.