Well, we flew out of Bergen on Sunday, 31st August bound for Evenes via Oslo. 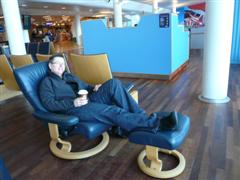 This marked the start of our trip around the Lofoten Islands north of the Arctic Circle between the 67th and 68th parallels. And boy, when we stepped out of the airport into a balmy 9 degrees with a sharp wind straight off the polar ice caps we knew we'd arrived.

One interesting thing about Norway is that it is like New Zealand 10 years ago, nothing is open on a Sunday! And anyone who has to open on a Sunday (ie Tourist places), can be shut on the Monday. So Sunday most places are like a ghost town. And because we flew on a Sunday and we needed a rental car, we had to pay extra (the blokes overtime rate) to pick it up! Before December, one would have had to take a ferry from the mainland of Norway to the Lofoten Islands, but now a whizzy new tunnel has opened under the sea. It's a wonderful feeling having millions of tonnes of water pressing down on your head, especially when the walls of the tunnel are dripping as you drive through. Mel's normally quite paranoid of tunnels (yes, just as paranoid as looking over cliff edges when driving too), but this aversion therapy is working nicely as in Norway we seem go through a tunnel every 20 or so kilometres.