Bergen is Norway's Capital for Bread. Just kidding. No one here has heard of Bergen Bread!

Though there are several very good bakeries, God Brod, for one has amazing loaves, but alas our budget doesn't really stretch to such luxury items as bread. Again, as with Oslo, the amount of rubbish on the streets is incredible and sadly it all seems to be McDonalds, Burger King and Doner Kebab wrappers. Every public park and fountain seems to be clogged up with this crap; Hong Kong was cleaner! And amazingly, so many people smoke, especially the younger people. I'd read in a tourist guide that it's illegal to smoke in bars and restaurants (like NZ) so a lot of people chew tabacco instead, this is probably why we've witnessed so many people spitting in the street too. Yuck! Gotta say, that I was hugely surprised by the lack of people smoking in Hong Kong! My my how times have changed!

Bergen was founded back in 1066, was the capital of Norway in the 13th century and was the largest city in the country for the next 600 years. Now it is a university city and cultural capital. The city surrounds a harbour with small wooden houses pushed higgledy-piggledy together at odd angles, cobble stone streets which climb steep hills, and more tourists shops per metre than anywhere else! We've just been taking pictures of souvenirs as it is cheaper than buying crap you really don't need. Tacky knitted jerseys, woolen hats, badges, stickers, jewellery, viking swords, tee-shirts, and trolls. Yes, very ugly mythical creatures which are priced like gold. Just amazing. Think of any object, any object. Now whack a red, white and blue flag on it and the large words “Norway” and a tag it with the price of a small car, and there you have it, a home made souvenir of Norway.


Down around Vagen harbour are the ancient wooden buildings and alleyways of the medieval area of Bryggens. 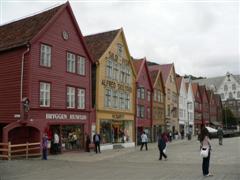 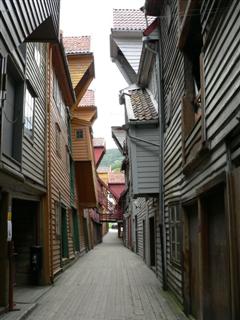 We took a walking tour with one of the museum guides and found that most of the buildings originally housed german merchants and their 'boys'. Archaeological digs in the small area have also uncovered parts of old boats, sticks marked in runes, and civilisation layers showing that the area burnt down almost every 20 years! It burnt down and was rebuild so many times in fact that any type of fire was banned, including candles for light, so each night the men (as there were no women in the area) gathered at the Schotsturene (pronounced 'Shit-stirrer' or so it sounded like, honest) to eat, drink and be merry. 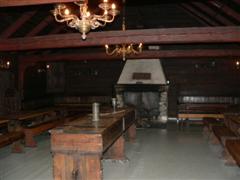 At the end of the harbour now-a-days is a Fish Market just bustling with tourists off the many cruise ships. It's full of giant crabs, king prawns, scampi, salmon (hot smoked, cold smoked and gravelox), rare blue lobsters, but worst of all whale. As you walk through the market everyone is offering you bits and pieces to taste (A great place to go if you are hungry). I gave most things a go, but drew the line at the pastrami whale. Even though it's Minke, and it is the only whale not on the extinction list the whale is still one of the most powerful creatures on this earth and to me it would be like eating human. We brought some very yummy salmon and feasted like kings for dinner that night by putting it in a wrap with avocado, lettuce and cream cheese. Much more decedent than our usual diet of bread, cheese and salami. We try and eat two simple meals a day to keep costs down, and then eat out for one meal. Amazingly enough the cheapest meals are usually Thai, so we are not complaining, the food is both tasty and healthy. Thank god coffee is only slightly more expensive that in NZ as Mel would be unbearable to travel with! 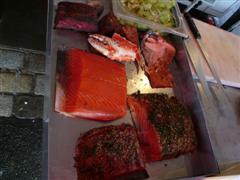 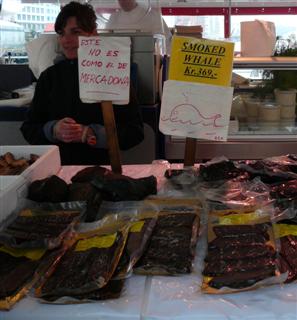 Not many of you would know that Mich's surname, Fisken, is as popular here as the name Smith is back home. Fiske means fish, which is the stable diet. In the supermarkets there are fish ball (fiskeboller), fish cakes (fiskekaker), and even fish pudding (fiskepudding), all of which are lightly fried and served with a white sauce. We've tried them several times and basically they are quite rubbery with no real flavour. 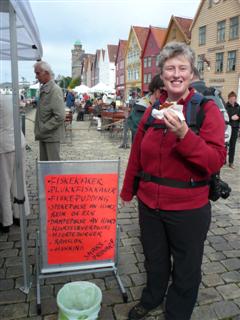 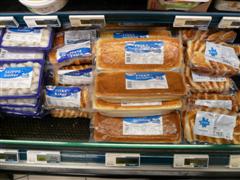 We took a ride on the Floibanen Funicular up to the summit of Mount Floyen. From 320 meters above sea level we had stunning views out over Bergen and the surrounding fjords and mountains. The top of the mount is crisscrossed with lots of walking trails which in winter turn into cross country ski trials. The sun was out for the first time in ages, so we just sat at the top soaking it in and watching the world go by.