From Oslo we took a 4 hour train journey across the countryside to Mydral. The countryside is tall, tall pine forests with clearings containing a group of traditional houses known as 'communes'. 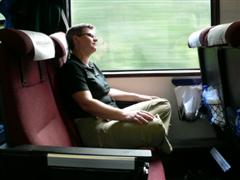 There is usually one white house surrounded by many red storages huts and a large red barn with white windows. Small amounts of land around the communes were growning grain or hay. Lots of bailage around, but we didn't see many animals at all. 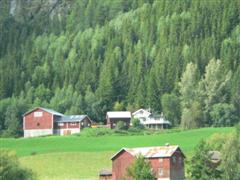 As the train climbed up through the mountains past the tree line, the land turned into large stretches of rocks covered with thick blankets of moss, patches of snow and ice, little ski lodges, and lots of lakes. Then, as we turned a corner, there layed out in front of us were three large glaciers, with their blue ice glistening. Just stunning.

From Mydral, we changed trains and took the spectacular Flam Railway down through the glacial valley to the town of Flam on the Aurlandsfjorden. This piece of track is world renowned for it's breathtaking scenery and engineering brilliance as 80% of the line has a gradient of 1:18, (thank god it has 5 sets of breaks!), and goes through 20 sets of tunnels of which 18 were hand dug.

The train has become so touristy that it now stops along the way to taken in a colossel waterfall, Kjosfossen, and views across the Flam Valley. 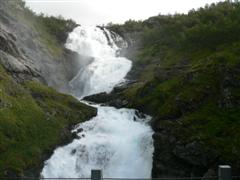 When the train pulled into Flam we were greeted by two huge cruise ships in the pretty little harbour. 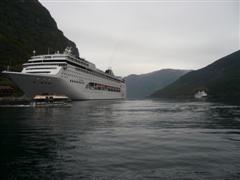 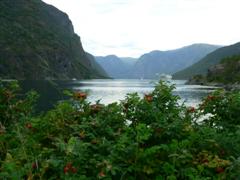 Apparently, it is like that all through summer with two different cruise ships arriving each morning and leaving in the evening.