We travelled to Greece for my cousin Cara's wedding.  Unfortunately the Greece I had dreamed about was not the Greece I visited in 2011.

We did not have much time in Greece so we visited Athens and the Islands of Aegina and Rhodes (where the wedding was held).  In Athens we stayed in Airotel Parthenon which was in an awesome location for sightseeing and thankfully close to the metro line.   The taxis were on strike so public transport was a necessity and given the hotels location we were able to either walk to the sites we wanted to see or catch the metro to the port and airport.

On top of Acropolis Hill sits the Acropolis overlooking the city below.  The Parthenon has always been a place of grandeur in my eyes but alas it did not live up to expectations.  I think if I had not travelled so much and seen places like Ephesus, Angkor Watt and the pyramids and temples of Egypt to name a few I would have been more in awe of this place.  We visited the Acropolis first thing in the morning and by the time we came to leave the bus loads of tour groups were taking over the site.  Thankfully we were able to experience it without the hordes and in the cooler part of the otherwise very hot day!

On the walk up Acropolis Hill you pass the Odeum of Herodes Atticus which would have been an amazing theatre to see a play or concert in.  Unfortunately there was nothing on whilst we were there and this is the only way you can visit it, however you get an awesome view looking down into the theatre on the walk up Acropolis hill.

The Parthenon itself is under restoration so large parts are covered in scaffolding.  From one angle I was able to get a good photo which had more building than scaffolding in it.  Some of the repairs look like Lego blocks 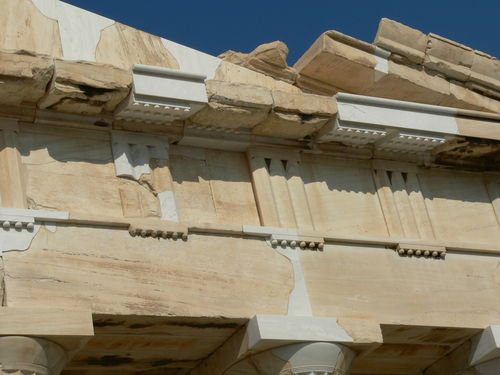 From here we strolled down to the Agora, which was the ancient market place where the Agora museum and Temple of Hephaestus are located...a lovely walk overlooking churches, temples and the city. 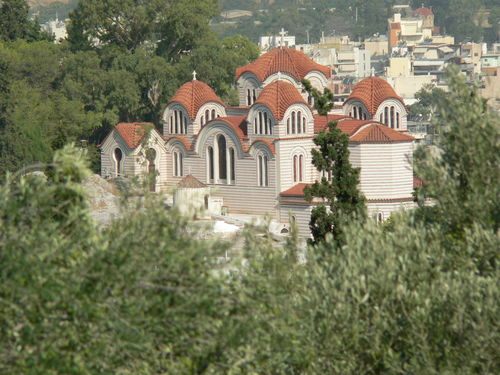 The Agora museum which is housed in the Stoa of Attalos is well worth a visit.  The marble passage is filled with wonderful columns and statues and inside you will find fascinating artefacts from the archaeological digs including the tiniest of shoes, jewellery,   and beautiful food storage jars.  It is also a cool respite from the heat of Athens at the peak of summer. 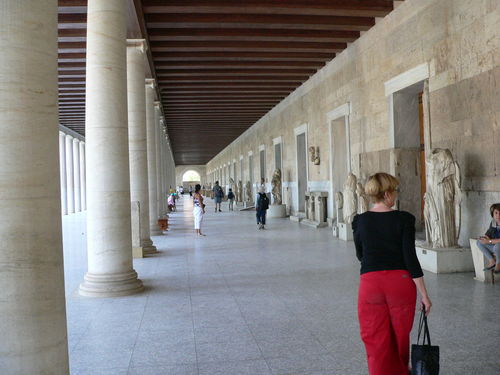 Walking the streets of the city centre, there is shop after shop trying to capture the tourist dollar and every now and again you come across something a little unique.  My favourite had to be a bar called Brettos that specialised in Ouzo but also had wine, spirits and liquors.  The walls were lined with awesome coloured bottles ...unfortunately I did not have my camera on me so didn't get photos

Mum found one place just around the corner from the hotel, where she could get the traditional Greek yoghurt with nuts and fresh local honey drizzled all over it....just like she remembered 30+ years ago 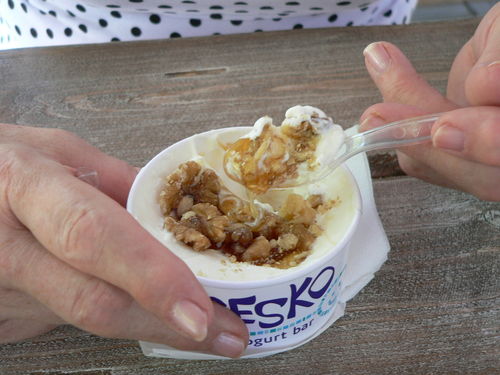 The New Acropolis Museum is well worth a visit.  When they were preparing the foundations for the building they discovered old buildings, wells and other artefacts, so they have built the museum across the top of the archaeological dig.  You walk across a glass walkway which enables you to look down on the archaeological finds - pretty awesome. 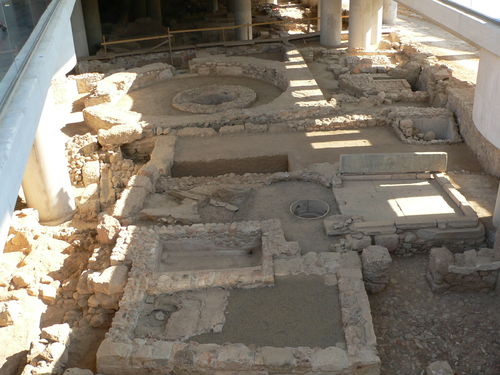 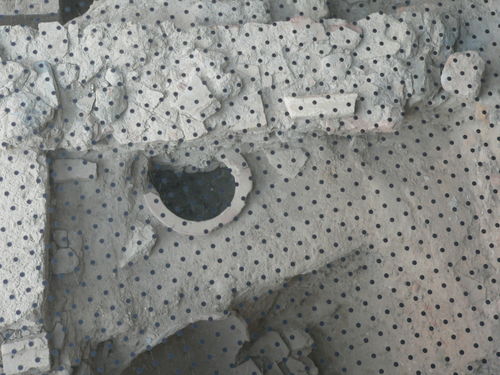 The hotel was also within walking distance of Hadrian's Arch and Temple of Olympian Zeus.  The temple only has it's magnificent columns still standing.  One of the large columns had fallen over which showed you how the columns were built and looked like slices of cheese. 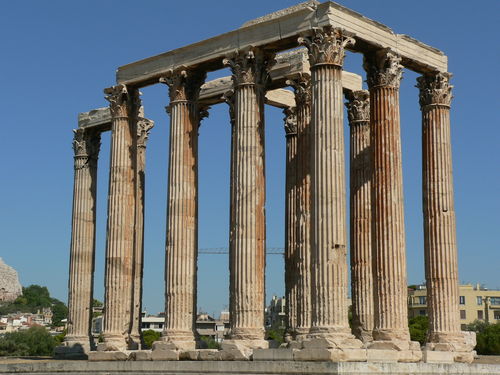 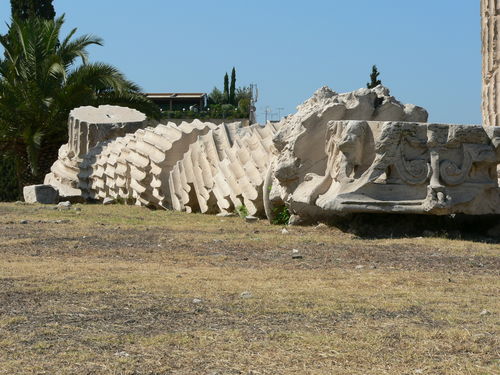 More photo can be viewed in the photo gallery.

Tip: I read a really useful forum entry on tripadvisor on when and how to visit the Parthenon which is in the Acropolis.  Basically, if you are not going on a tour, then go early and enter via the entrance located near the Akropolis metro station.   Go directly to the Parthnon making a brief stop at the Odeum of Herodes Atticus Theatre on the way and take some photos. You should miss the thousands of people arriving with tour groups.  You can then check out the other sites within the Acropolis surrounding the Parthenon.  Then carry on down to the Agora where less tourist group go and exit out to Monastiraki.  This is a better than entering from the Monastiraki end of the hill - less time spent climbing hills.  Also take plenty of water with you especially in summer.