Last night the two Chef's meet at Rongomai Ridge for the inaugural burger cook-off with a specially designed apron at stake!

Mel made Thai style pork patties with pineapple, cheese, lettuce and a secret sauce in a sesame-coated bun.

The three judges, myself, Treena and Jill (Tony's wife) ate the burgers, 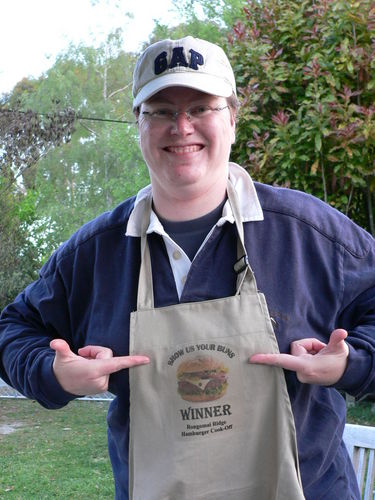 and after much deliberation declared Mel the winner!

Tony declared another cook-off was to be held next month with both chef's required to come up with a new burger for the judges to taste!  Once again the apron will be at stake.  Treena will not be available for judging, however we will find a third judge for the occasion!

More photos can be found in the photo gallery.